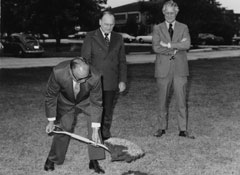 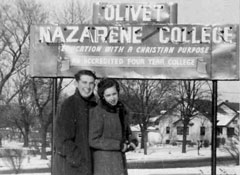 Mary Ada Dillinger began her career with Olivet as Catalog Librarian. Upon partial retirement she became University Archivist. She attended several Archivists workshops and applied that knowledge into updating procedures, laying groundwork for digitizing the Archives’ holdings, and bringing a fresh perspective to the department.

Mr. Moore served as Secretary to the Superintendent of the Chicago Central District. His tenure at Olivet included Alumni Executive Director, Director of Admissions, Assistant Dean of Instruction and, upon retirement, University Archivist. Norman Moore understood the importance of gathering the history of the university into a dedicated place and was responsible for the initial gathering together and categorizing of materials, documents, memorabilia and photos of Olivet’s history. He procured a portion of the campus library as well as large displays in other buildings and made the Archives a viable department to the institution.

After working as Alumni Coordinator and News Director for Bethany Nazarene College, Gordon was invited to recruit and counsel students at Olivet. He then became Director of Publicity. Upon “retirement,” Gordon worked at the Kankakee Daily Journal, coordinated the annual Bourbonnais Community Prayer Breakfast, worked with the Association of Retired Ministers and Missionaries, and continued working closely with Olivet on special projects. Gordon also continued a close relationship as Olivet alumni Historian. His time with Olivet began four years after the institution moved to its current location-from student, to alumnus, through employment and retirement. Gordon Wickersham spent much time advising and contributing to the Archives Department.